Posted on November 18, 2012 by uprightdoctor 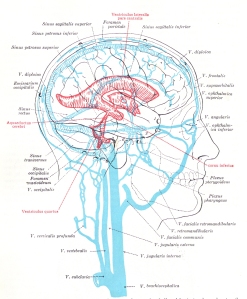 CSF leaves the subarachnoid space and enters the superior sagittal sinus, which is part of the venous drainage system of the brain. The dural sinuses are the large striped blue colored veins in the picture on the left. The veins of the brain also empty into the dural sinuses. They are depicted as the smaller light blue vessels on the surface of the brain. The primary drainage routes of the dural sinuses empty into the internal jugular veins and the vertebral venous plexus of the spine. The internal jugulars and vertebral veins are the large, vertical,  blue vessels beneath the skull. Increased pressure or obstruction of the venous outlets of the brain can affect CSF flow and volume. It can also effect pulsatility and pressure waves in the brain which will be explained further below.

Interestingly, the ventricles and periventricular areas (which is where the corpus callosum is located) are often involved in neurodegenerative diseases. For example, enlarged lateral ventricles have been associated with normal pressure hydrocephalus (NPH), Alzheimer’s and Parkinson’s disease. NPH is a condition that occurs in adults when the ventricles of the brain become enlarged due to an increase in CSF volume but pressure in the brain, called intracranial pressure, remains normal or just slightly elevated. Parkinson’s disease and Dandy-Walker syndrome are associated with an enlarged fourth ventricle, as well as enlargement of the subarachnoid cisterns. More recently, multiple sclerosis has been associated with an enlarged third ventricle. I cover CSF and the ventricles’ role in the conditions listed above in my book,“The Downside of Upright Posture – The Anatomical Causes of Alzheimer’s, Parkinson’s and Multiple Sclerosis.”

In any case, the enlarged ventricles are typically attributed to atrophy. The cause of the atrophy (decrease in size), however, is often unknown. In this regard, neurodegenerative conditons are also often associated with hyperintensity signals and degeneration of the delicate tissues located next to the ventricles called the periventricular area.  Among other things, the periventricular area forms an interface between the brain and ventricles similar to different soil layers called strata or the tectonic plates of the earth. Just like soil strata and tectonic plates, the lobes of the upper brain can similarly slide on the periventricular surfaces of the lower brain and cause a strain.

The periventricular interface contains small blood vessels and delicate myelin covered nerves. Scientists have suspected for decades that myelin is more sensitive to shear stresses and strains. They maintain that enlargement of the ventricles can cause nearby myelin to over-stretch and snap. They further suspect that myelin is more easily damaged by decreases in blood flow (ischemia) and that mechanical stresses and strains may damage the smaller periventricular blood vessels. This could lead to chronic ischemia and atrophy (decrease in size) of the brain. Researchers suggest that the ventricles enlarge to fill the vacated space caused by the atrophy of the surrounding tissues. Interestingly, in addition to atrophy and enlarged ventricles, hyperintensity signals are often in the periventricular areas in Alzheimer’s and multiple sclerosis as mentioned and shown in the brain scan above. Among other things, hyperintensity signals can be a sign of demyelination. They can also be a sign of ischemia. In future posts I will explain how, because of its location, the periventricular area is caught between a rock and a hard place. Consequently, the periventricular area suffers the consequences of faulty hydraulics in the brain.

Researchers are currently studying the potential role of  pulsating, strong, high pressure waves in neurodegenerative diseases as a cause of atrophy. The strong, pulsatile, high pressure waves come from the heart which pumps a relatively large volume of blood into the brain with each beat. This causes rhythmical pulsations of increased volume of blood in the brain that produces increased pressure waves that ripple through the entire brain from the point of entry to its exit routes within the cranial vault.

Most of the force from arterial pulsations is normally absorbed by veins in the subarchnoid space which have weak walls that are easily compressed. The impact of arterial pulsations in CSF and the rhythmical compression of the veins help to move venous blood and CSF through their pathways and out of the cranial vault. Scientists suspect that problems can occur if high arterial pressure waves aren’t sufficiently buffered in the subarachnoid space, but instead are directed into the core of the brain and the more delicate micro-sized capillary blood vessels.

Scientists and engineers are now using biphasic poroelastic properties in computational fluid dynamics and finite element analysis to model tissues and fluid mechanics in the brain. Poroelasticity is a complex subject related to geotechnical engineering regarding soils and rocks. It is is also known as the consolidation theory in soil mechanics as first described by professor of physics M.A. Biot from Columbia University. Basically, porous materials contain spaces called pores or voids and are elastic. The flow of fluids through porous materials, such as rocks, is a separate study. Engineers use complex physics formulas and computer programs for computational fluid dynamics to predict hydraulics and fluid flow through soils and rocks.

Fluids inside poroelastic materials affect the material’s structural strength and the way it responds to stresses and strains (deformation). The many different types of soils and rocks all have different types of pores that affect their structural strength and their stability under stresses and strains. In addition to overall strains, engineers use finite element analysis to break down larger macrostrains into smaller microstrains located at intersections along the overall strain.

The brain is loaded with many non-spherical, irregularly shaped pores, ventricles (caves), fissures (cracks), sulci (valleys) and other assorted spaces and shapes that make it difficult to interpret and predict tissue deformation, fluid behavior and hydraulics based on brain scans. Tissue deformation and hydraulics in the brain are important to neurosurgeons for many reasons, including shunt surgery. The use of a mechanical model for more realistic geometry of the brain was proposed decades ago by Dr. S. Hakim,  a neurosurgeon, who was one of the pioneers in NPH.

Dr. Hakim published a paper in Surgical Neurology in 1976 called, The Physics of the Cranial Cavity, Hydrocephalus, and Normal Pressure Hydrocephalus: Mechanical Interpretation and Mathematical Model. Dr. Hakim also introduced the concept of the brain being a sponge-like material (poroelastic). More recently, a paper was published by the Oxford University Computing Laboratory in 2004, “A Hydro-elastic Model of Hydrocephalus” by A. Smilie and others, which combines poroelasticity and fluid mechanics to, likewise, construct a mathematical model of the human brain and ventricles. Mathematical models provide clues as to how faulty hydraulics may play a significant role in neurodegenerative diseases.

In brief, for engineering purposes and computer modeling, the fluid mechanics in the cranial vault and and brain can be compared to hydraulic stresses in rocks and soils. My next post will be on the role of poroelasticity in brain pulsations, pressure waves and deformation, such as atrophy and enlarged ventricles. For further information regarding common signs and symptoms of neurodegenerative diseases that are most likely related to hydraulic stresses acting on the third ventricle, such as frequent urination, incontinence, cog fog, heat intolerance, etc.,  visit my website at upright-health.

I am a sixty year old retired chiropractor with considerable expertise in the unique designs of the human skull, spine and circulatory system of the brain due to upright posture, and their potential role in neurodegenerative diseases of the brain and cord. I have been writing about the subject for well over two decades now. My interests are in practical issues related to upright posture and human health.
View all posts by uprightdoctor →
This entry was posted in Alzheimer's, CSF, ms lesions, Parkinson's. Bookmark the permalink.