Posted on February 6, 2011 by uprightdoctor 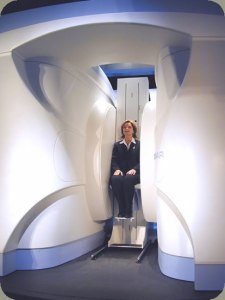 The picture on the left is from promotional  material for Fonar Corporation’s upright MRI. In this regard, my theory is that humans are predisposed to neurodegenerative diseases such as Alzheimer’s, Parkinson’s and multiple sclerosis due to the unique design of the skull, spine and circulatory system of the brain as a result of upright posture. In addition to blood flow, upright posture also changes CSF flow. Besides its added benefit in many other health conditions, when it comes to blood and CSF flow, upright MRI is the wave of the future in brain research.

Cerebrospinal fluid (CSF) flow is called the third circulation of the brain and it is the least understood. CSF production and flow is critical to brain cushioning and protection. In terms of protection CSF is important to brain support to prevent the brain from sinking in the cranial vault. Conversely, excess CSF volume compresses the brain.

CSF comes from arterial blood that has been filtered through the blood brain barrier to the point where it is mostly water. CSF leaves the brain through the venous system. Therefore, backups in the venous drainage system affect cerebrospinal fluid (CSF) flow and drainage. Although it uses other routes as well, such as cranial and spinal nerves and the lymphatic system, most of the cerebrospinal fluid (CSF) produced by the brain eventually makes its way up to the superior sagittal sinus where it empties into the venous system. 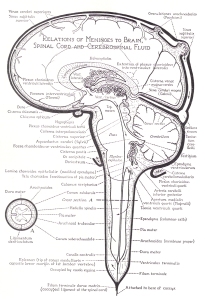 The superior sagittal sinus, depicted in the graphic image on the right, is the largest dural sinus located at the top of the brain.  The superior sagittal sinus contains arachnoid granulations that act as one way check valves for the flow of CSF from the subarachnoid space to the sinus. Click on the image for a better view. The pulsatile nature and the pressure generated by the CSF outflow through the arachnoid granulations is powerful enough to scour impressions into the roof of the cranial vault.

About sixty percent of the CSF produced in the brain ends up in the spinal cord. Eventually most of the CSF in the spinal cord makes its way back up through the subarachnoid space of the cord and into the subarchnoid space of the brain. From there it travels up to the superior sagittal sinus and arachnoid granulations to exit the brain along with venous blood.

The movement of CSF is driven by cardiovascular waves arising from the heart and blood vessels. During the contraction phase of the heart cycle (systole) pressure in the arteries of the brain increases. The increase in blood pressure drives CSF out of the brain through the upper cervical spine because as blood volume rises CSF volume must decrease. During the relaxation phase (diastole) the pressure drops and CSF enters the cranial vault through the subarachnoid space of the upper cervical spine. In addition, because the veins of the vertebral venous plexus of the spine have no valves, respiratory pressure changes are transmitted to the brain and amplify the cardiovascular waves. In brief, as pressure in the chest cavity drops during inspiration, due to the diaphram moving down and the chest wall moving out, CSF is pulled out of the cranial vault. As pressure in the chest cavity increases during exhalation CSF is driven into the cranial cavity. Thus,  combined cardiorespiratory waves are important to the movement of CSF through the brain and cord.

Genetic design flaws, such as Chiari malformations, and acquired disorders from injuries or disease can impede the pulsatility and flow of CSF through the upper cervical spine. Restrictions in CSF flow that cause a decrease in its volume, can, in turn, cause Chiari malformations and pressure conus conditions. Furthermore, any condition that restricts CSF flow can lead to hydrocephalus-like conditions. It is therefore important to maintain the correct volume of CSF in order to provide sufficient brain support and protection, as well as to prevent hydrocephalus.

The picture above shows a fairly severe rotational misalignment of the upper cervical spine to the right. Click on the image for a better view. The dart shaped structure in the upper cervical spine is the spinous process of C2. It should be in the midline. The misalignment was caused by a motorcycle accident in which the victim landed on the right side of his head causing his head to snap to the left while simultaneously shifting and twisting his upper cervical spine to the right. Misalignments, such as the one above (due to micro or macro trauma), genetic design flaws (Chiari malformations), diseases (rheumatoid arthritis) and degenerative conditons (aging) of the upper cervical spine can affect the vertebral arteries that supply the brain, as well as the vertebral veins that drain the brain during upright posture. They can also cause deformation of the subarachnoid space and consequently, they can affect CSF flow going into and out of the brain and cord.

While CCSVI treatment can improve venous drainage, which may further relieve hydrocephalic conditions in certain cases, it cannot improve CSF flow through the subarachnoid space of the upper cervical spine. Furthermore, increasing venous drainage of the brain and consequently decreasing CSF volume without a proportionate rise in passive CSF production could compromise brain support causing it to sink in the vault resulting in a condition similar to a pressure conus or Chiari malformation. Over drainage of the brain may thus present problems similar to spinal taps which can cause headaches due to a pressure conus condition following CSF removal. Over drainage is probably less likely in younger cases where the passive CSF pressure gradient and CSF production remains strong. Older patients, on the other hand, may have a lower CSF pressure gradient and thus a decrease in passive production of CSF due to aging of the brain and chronic craniocervical back pressure against the vertebral veins and subarachnoid space.

The flow of CSF clearly plays a role in normal pressure hydrocephalus (NPH), which has been associated with Alzheimer’s and Parkinson’s disease. It also plays a role in Chiari malformations, which cause signs and symptoms similar to MS. I discuss CSF production and flow thoroughly in my book. I will be discussing it more here in future posts as well as on my new website at: http://www.upright-health.com/.

I am a sixty year old retired chiropractor with considerable expertise in the unique designs of the human skull, spine and circulatory system of the brain due to upright posture, and their potential role in neurodegenerative diseases of the brain and cord. I have been writing about the subject for well over two decades now. My interests are in practical issues related to upright posture and human health.
View all posts by uprightdoctor →
This entry was posted in Alzheimer's, ccsvi, chiari malformations, Devic's disease, multiple sclerosis, neuromyelitis optica, optic neuritis, optic spinal multiple sclerosis, Parkinson's, physical anthropology. Bookmark the permalink.